Condensing Furnace: The Right Choice For Your Home? 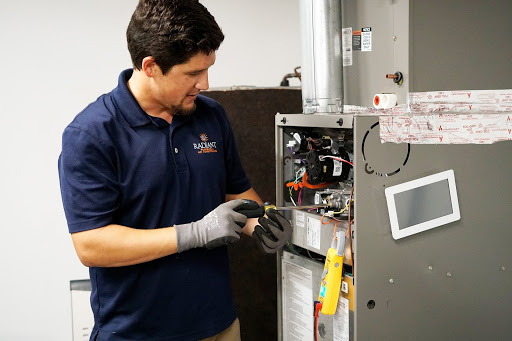 As the (relative) cold of the Texas winter sets in, many homeowners become more aware of the performance of their central heating system. Being able to easily control the temperature in your home can have a great impact on quality of life. So let’s talk about furnaces. Replacing & installing a furnace is a big investment to begin with, and there are many more factors to consider when thinking of opting for its upgraded big brother: the condensing furnace.

Sounds like a no-brainer, condensing furnace it is! Not so fast, let’s first explore a couple of reasons you might want to stick to a traditional furnace:

For The Most Part, It Can Handle The Texas Weather

Condensing furnaces become more and more popular the closer you move to cold climate areas, which makes sense! But for some Texas homeowners, who only run heating for 3-4 months out of the year, it can feel like a bit of a luxury.

Not As Reliant On Infrastructure

A traditional furnace is not as dependent on other fixtures in your home in order to produce its output. A condensing furnace on the other hand requires stellar insulation and ductwork to realize its full potential. Areas around the house that allow that extra generated heat to escape can almost entirely cancel out the added benefits of having a condensing furnace. And so improving your home’s insulation and getting leaks sealed can result in many added expenses.

As its main benefit is durability and efficiency over time, investing in a condensing furnace and moving a few years later makes the investment less viable. This goes without saying, but if you’re planning on moving in the short to medium term, it makes sense to go for the standard furnace.

As discussed earlier, the condensing furnace is far more fuel efficient than its traditional counterpart thanks to its extra heat exchanger and other bits of advanced technology like variable-speed blower motors and sealed combustion. A furnace’s energy efficiency is measured by its Annual Fuel Utilization Efficiency (AFUE) Rating which is expressed as a percentage. Standard furnaces average around 80%, while condensing furnaces score at least 90%, with some even exceeding 95%.

Save In The Long Run

The more efficiency rises, the more your monthly heating costs will drop. Homeowners who invest in a condensing furnace typically see a decrease in their energy bills within months, making it not only a smart financial decision but also environmentally responsible. Thanks to its durability, the condensing furnace requires less maintenance and is less likely to suddenly break down. But checkups are always advised to make sure your furnace is in tip top shape.

Now let’s talk about a benefit you can actually feel. We all have that one unpredictable room in our home that’s always freakishly warm or unbearably cold. Homeowners who install condensing furnaces observe a noticeable improvement when it comes to cold and warm spots throughout the home. This is achieved in part by the condensing furnace’s ability to run for longer periods of time at a lower capacity, which results in the gradual dispense of heat in every room. Sealed combustion also plays its part in heating the home evenly. Condensing furnaces draw air from outside via pipes, allowing it to avoid reusing indoor air that has already been heated. As you can tell, there’s lots to consider when deciding between a condensing and non-condensing furnace. Every homeowner has different preferences and needs, and doing ample research is a great way to start. Your next step is to reach out to a technician who can further help you understand the various benefits and drawbacks of each option.

If you’re interested in purchasing a condensing furnace or if you would simply like more information, don’t hesitate to reach out! Our customer service team is ready to take your call night or day.